Defending the Commons, Territories and the Right to Food and Water 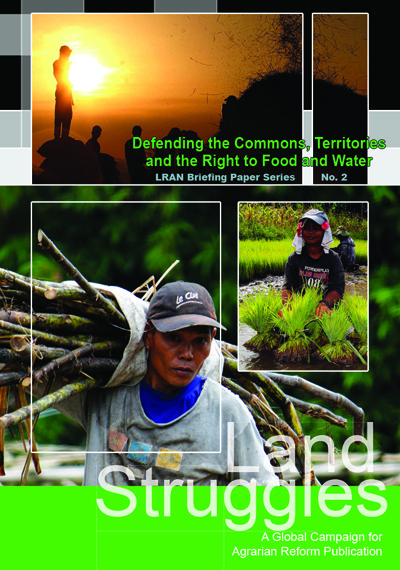 On World Food Day, it is estimated that almost a billion people around the world are now suffering from hunger and malnutrition - a dramatic rise in number since the soaring food prices over the last three years.  Of these, about half are estimated to live in smallholder farming households, while roughly two-tenths are landless, another tenth are pastoralists, fisherfolk, and forest users, and the remainder live in the cities. This crisis of world hunger is set to deepen as livelihood resources such as land and water continue to be transferred from such groups to the financially powerful in ever larger areas and longer timeframes.

In support of social movements and grassroots activists working to defend the rights of local people to land and natural resources and to re-orient policies towards food sovereignty in a new era of fuel scarcity, climate volatility, and economic readjustment, the Land Research Action Network (LRAN) launches its second series of briefing papers in contribution to the Global Campaign for Agrarian Reform (GCAR).  This series takes up the theme of Defending the Commons, Territories and the Right to Food and Water.

This second collection of LRAN briefing papers address the issues of food, finance, energy and climate crises through food sovereignty and agrarian reform and presents some of the experiences of activist researchers working to defend the commons and vulnerable territories. As before, the papers have been written and edited for readers who are not native speakers of English, and it is intended that they can be relatively easily translated. They are particularly aimed at activists and community leaders within social movements working on land and agriculture.

The papers are grouped in three parts. The first part presents analyses of the concurrent crises and highlights the impact they have brought for vulnerable people who directly rely on their land. (Land and the World Food Crisis, Peter Rosset; Sugarcane Monocropping and Counter Agrarian Reform in Brazil, Maria Luisa Mendonça; and Weathering the Storms: land use and climate change, Shalmali Guttal)

The second set of papers relates to different ways in which land and territory are viewed from different perspectives.  The papers present brief examinations of the issues and dynamics of common resource tenure, the international work to define and recognise rights to land, and the threat of massive dispossession of land as global land grabbing expands.  (Rights to land and territory, Sofia Monsalve; In Defense of the Commons, Shalmali Guttal and Mary Ann Manahan; and Is Asia for Sale?, Mary Ann Manahan)

The final section of this edition of our briefing papers turns to focus on the experience of the local, and the campaigns conducted from grassroots to the national level to call for redressing the wrongs of dispossession, renewed action to redistribute land, and changes to government policies on agriculture and trade.  (The Grand Theft of Dey Krahorm, David Pred; Bringing Filipino agrarian reform back to life, Carmina Flores-Obanil; and Formalizing Inequality, Natalie Bugalski and David Pred)

Altogether these briefing papers present some of the central issues in the continuing struggle to ensure that the poor and the peasantry regain their rights to govern and steward the commons and other natural resources on which they build their livelihoods.  They emphasise the multiple crises facing the countries of the South of climatic instability, unsustainable development, and excessive resource extraction, of food price instability, the systematic undermining of food sovereignty and the long-term viability of the small-scale farming sector, and of a new wave of land grabbing.  They argue for a human rights based approach and reject the notion that land is no more than a tradable commodity. They call for public policies and resources to be redirected towards supporting peasants and smallhold producers and the urban poor, so that they can live and work on the land that they identify with and rely on. Collectively, they call for greater international, regional national and local policy attention to the importance and value of the commons and strong community institutions for a functioning and sustainable society.

Annex
·         Open letter from civil society groups to IFIs: Stop land grabbing now!
·         It's time to outlaw land grabbing, not to make it to make it "responsible"!
·         Report on Asian Civil Society consultation on the FAO Guidelines on Good Governance of Land and Natural Resources

This series contributes to the Global Campaign for Agrarian Reform (GCAR), which serves as a platform for promoting effective agrarian reform in countries with highly unequal patterns of land ownership. GCAR members are La Via Campesina, Food First International Action Network (FIAN), and LRAN. GCAR aims to strengthen the struggles and voices of national peasant movements for agrarian reform in their own countries and internationally. Effective agrarian reform is understood by peasant and landless organisations throughout the world as a bundle of policies that ensure that agricultural land is distributed to landless peasants and smallholders swiftly and equitably. For more information, please visit http://viacampesina.org or http://www.fian.org/programs-and-campaigns/projects/global-campaign-for-agrarian-reform.