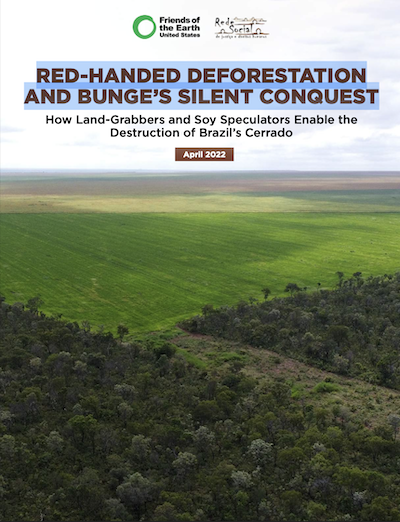 Over the last 20 years. the region of Brazil known as MATOPIBA (acronyms of the states of Maranhão, Tocantins, Piauí, and Bahia) has been the center of expansion of the soy industry and, consequently, subject to massive destruction of the region’s rich natural ecosystems. Over the last five years, 76% of the expansion of the agricultural frontier in MATOPIBA has occurred in

areas formerly characterized by unique native vegetation and now carpeted in an industrial monoculture of soy plantations. Soy monocultures currently occupy over 4% of Brazil’s entire territory; half of this is in the Cerrado biome.

total area. Together, cattle raising and soy monocropping correspond to practically 80% of the deforested area in the MATOPIBA region of the Cerrado.
Known as the “birthplace of waters,”
Brazil’s Cerrado is the world’s most biodiverse tropical savannah and home to diverse peasant, quilombola (rural Afro- Brazilian), and indigenous communities.
The expansion of the soy frontier fuels the use of fire, deforestation, and the grabbing of rural communities’ land, and leaves behind a desolate landscape of polluted rivers and depleted soils, which in turn further impoverishes rural communities. Deforestation destroys biodiversity and the sources of the rivers in the Cerrado, which play a fundamental role in the water balance in Brazil. It contributes to the sedimentation of the rivers that are born on the plateaus and drain into the lowlands, which kills

the fish and makes it difficult for the communities to use the water collectively. Soy corporations also pollute the rivers and the communities’ food production with chemicals that they spray from airplanes.

An accompanying report to this one, Industrial Soy Expansion in Brazil: Financialization, Deforestation, and Dispossession in the Birthplace of Waters, describes the correlation among the industrial soy expansion, land speculation, and financialization of farmland.